The European Student Earth Orbiter (ESEO) is a micro-satellite mission to Low Earth Orbit. It is being developed, integrated, and tested by European university students as an ESA Education Office project.

It is aimed at providing students with unparalleled hands-on experience to help prepare a well-qualified space-engineering workforce for Europe’s future. 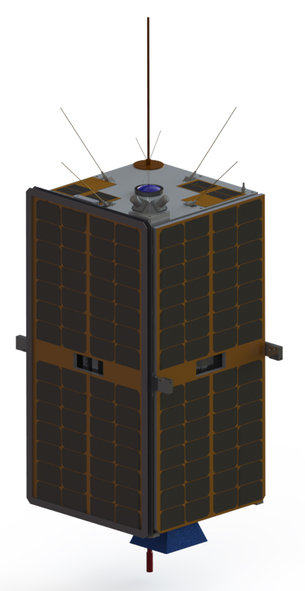 ESEO is the third mission within ESA’s Education Satellite Programme and builds upon the experience gained with SSETI Express (launched in 2005) and the YES2 tether and re-entry capsule experiment (launched in 2007). The project is currently in Phase C, the detailed design stage, with students actively involved from nine universities across all Europe.

Once in LEO, the spacecraft’s mission is designed to last for six months, with the possibility of an extended mission afterwards. The orbit will be Sun Synchronous, meaning that it will always cross the equator at about the same local time every orbit, and its maximum altitude will be no higher than 600 km. At the end of its mission, it will deploy a drag sail being supplied by Cranfield University, UK. This will ensure that ESEO re-enters and burns up in Earth atmosphere, thus complying with the European space debris code of conduct.

Industrial System Prime Contractor ALMASpace, Italy, is managing the ESEO project. In coordination with the ESA Education Office they provide system-level and specialist technical support to the student teams during the execution of the project. The students obtain training, and benefit from their access to ALMASpace and ESA expertise. They can use industrial and ESTEC facilities for spacecraft assembly, integration and testing.

The student teams are expected to provide most of the spacecraft subsystems, payload and ground support systems as part of their academic studies. They achieve this in coordination with their universities and European space industry.

The TRITEL (three dimensional silicon detector telescope) module on the ESEO. More information about the TRITEL detector here and here.