The Stratos II project is a student project of Delft University of Technology. The aim of the project is to reach 50km altitude with a student build sounding rocket that will carry onboard a scientific payload. The whole rocket will be designed, tested, build and launched by students of Delft Aerospace Rocket Engineering (DARE).

DARE was founded by students of the faculty of Aerospace engineering at the TU Delft in the year 2001 to add a practical aspect to their study in space engineering. They started experimenting with rocket technology and rocket engines. From the start the philosophy of the organization has been to has the members themselves build, design and test all of their systems. This also includes the rocket motors which form the hard of each rocketry system. Over the years DARE accumulated a vast database of knowledge on the field of amateur rocketry on the small and medium scale with projects such as CanSat.

By now DARE has developed into a active community of almost one hundred students who share a common interest in space engineering and space technology. All main branches of engine development are covert by the teams focused on solid, hybrid and liquid propulsion systems. Next to that DARE has a vast experience in test safety, launch campaign organization and range safety. Each year a number of launch days are organized in the Netherlands, multiple tests are conducted and over the years a few launch campaigns have been carried out abroad, such as in Germany, Spain, Sweden and South Africa.

A number of years after the start of DARE the members of the team wanted to achieve something more with their rockets. They set their aim to shatter the altitude rockets for amateur rocketry. They began the Stratos I project. From the ground on up they developed a special booster motor, a sustainer motor, custom electronics, stage separation systems and a parachuting system with the knowledge they had available. Their efforts culminated in the launch of Stratos I in 2009 from Esrange in Sweden. The rocket reached 12.5 kilometer altitude and broke the European record for amateur rocketry. A record DARE still holds today. For more info Stratos I, look here.

After the successful launch of this rocket the students started to dream of even higher goals. Once again an idea was conceived to launch a rocket to higher altitudes then a student organization did ever before with equipment they completely developed themselves. The goal was set to reach 50km altitude.

However this was not the only goal. The rocket shall also need to carry on board a scientific payload. This payload can consist of electronic systems that perform measurements on the conditions in the higher atmosphere around 50km. This is an altitude range that is to high for aircraft or balloons, but to low for satellites. Other options for the payloads can be to test electronics onboard the rocket that are meant for usage onboard satellites. In this way the electronics can experience the most difficult part for satellites, lift-off, for a fraction of the costs of a real satellite launch to orbit. This makes Stratos II a real sounding rocket.

A lot of hurdles need to be taken to get to this final goal. The propulsion system used for Stratos I was not sufficient to perform this new mission and a full new system needs to be developed to carry out this goal. The electronics need to be very elaborate to accommodate the payload in the rocket and the nosecone of the rocket needs to resist the loads and temperatures that it will experience while the rocket will travel up to multiple times the speed of sound. Next to all the technical problems the challenges are also great in the logistics and organization that come with such a larch project. The team is working hard on all these aspects and has already made significant steps towards the final systems. A lot of development has been made in the propulsion and electronics departments, a good team organization has been set up and in the beginning of 2012, Dutch Space became the main sponsor of the project.

The Stratos II project is still going strong and the team is working hard for the completion of the rocket that will once again push the boundaries of the student rocketry community in Delft and in the world. 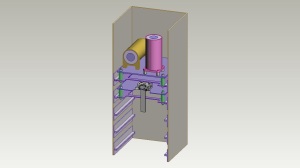 The current design with the Geiger-Müller tubes.